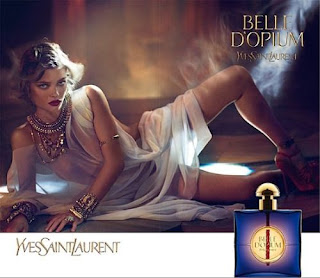 Belle d’Opium fragrance courtesy of Yves Saint Laurent
Belle d’Opium is an oriental-style cologne developed by perfumers Honorine Blanc and Alberto Morillas; it is described as having “less of an amber-like effect” than the original Opium fragrance. According to the perfumers, the idea of Belle d `Opium was based on the contrast between the words belle (French word which means beauty) and opium that promises mystery and danger; indeed, Opium is designed to attract the woman and keep her attention for admiration, while Belle d’Opium focus on herself. She is attractive and special and Belle d’Opium fragrance completes her attractiveness.

Yves Saint Laurent’s Belle d’Opium starts off with a floral, woody scent. After about some thirty minutes, Belle d’Opium turns into a jasmine based fragrance with narguile undertones. The fragrance is very nice, however the scent has less tenacity; unfortunately, it doesn’t last long on your skin. The perfume contains notes include Casablanca lily, sandalwood, gardenia, white pepper, jasmine and narguile accord.

In terms of packaging, I’m a big fan of the bottle, which I think is sexy, unique and looks attractive amongst my other perfume bottles. The advertising campaign features the beautiful up and coming French actress Melanie Thierry dancing on a choreography created by Akram Khan, with an original music composted by Nitin Sawhney.