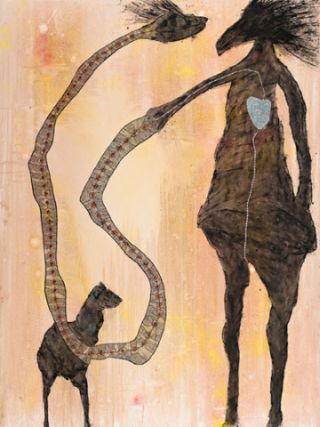 Joaquín González. Nakawa Schunita Shantyoshi, 2010.
India ink and pigment on canvas. 78 x 59 inches.
Ellen Charapko Gallery will present the solo exhibition: Joaquín González, Recent Works in Ink. The gallery will host an opening reception on Friday, January 21, 2011, 7:00 - 10:00 p.m. The artist will be present. The exhibition will run through February 12, 2011.

The latest works of Joaquín González have been inspired by a little known South American Indian tribe, who live in one of the most primitive locations on the planet, the Amazon. Gonzalez introduces the Shipibo-Conibo Indians to the rest of the world through his art. This latest series by González is a peek into the lives of the native, Amazonic Indians of Perú, who speak in the Ashaninka language. Their realm of existence is dramatically unlike our fast-paced modern society. Gonzalez, through this new series of work, casts light onto their everyday routines, ancestral rituals and ceremonies. He uses a multitude of iconic images, almost a "story-board," visual documentary of "a day in the life."

Gonzalez states that his experience in the Amazon, not only with the people but the river and jungle, "has been both beautiful and fearful, but, mostly a freeing experience in relationship to my artistic expression." Through his interaction with the Shipibo-Conibo, González developed a close friendship and mutual trust with them. All of this led him to a better understanding of man and his roots, which he has incorporated into his latest body of work.

Joaquín González was born in 1957, in Cuba. In 1982 he moved to Spain and eventually relocated to the USA in 1999. He lives and works in Miami, Florida. Besides painting, González is also a master printer. His work has been featured in various prestigious exhibitions around the world, including Cuba, Spain, Latin America, and the United States.

Ellen Charapko Gallery was founded in 2006. Evening hours are Wednesday through Saturday and by appointment. The gallery is located at 2374 Wilton Drive, in Wilton Manors Art & Entertainment District.