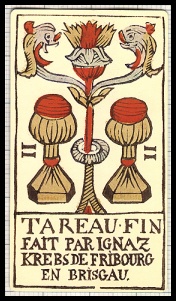 Tarot de Marseille (Tarot Rhenan).
Faithful reprint of a pre-1800 Marseille Tarot by Ignaz Krebs of Freiburg in Breisgau.
Austria Vienna Piatnik Tarot of Marseilles Sometimes known as Tarot Rhenan - Facsimile of the original by Ignaz Krebs of Fribourg in Brisgau c1780 this complete Tarot deck published 1984 full size 65mm x 120mm with reproduction of the classical Marseille images 78 cards plus 36 page booklet with instructions and Tarot reading guide.
Tarot Rhenan is an 18th-century German Marseille-like deck. The original deck was produced somewhere near the borders of both Fance and Zwitserland. The technique used was that of wood block printing.


Tarot Rhenan
Description: Reproduction of a historical Marseilles deck by 18th century cardmaker Ignaz Krebs, as recreated by George Gottlob. Published by Piatnik in 1985. 78 cards in cardboard box. Faithful reprint of a pre-1800 Marseille Tarot by Ignaz Krebs of Freiburg in Breisgau.

Freiburg im Breisgau is quite near to the German border with France (Strasbourg!) and that with Switzerland. And this city went through the occupation by France a few times in the 17th and 18th centuries. 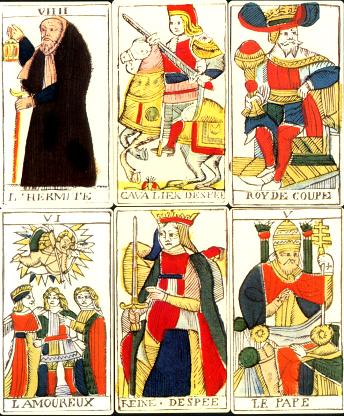 The Marseille Tarot (or Tarot of Marseille), also widely known by the French designation Tarot de Marseille, is one of the standard patterns for the design of tarot cards. It is the pattern from which subsequent tarot decks derive either directly or by way of decks that themselves derive from it.

According to leading author Michael Dummett, Tarot has been invented in northern Italy in the fifteenth century. It is at times referred to as the Milan pattern. Proponents of the Dummet theory of origin claim that tarot cards were introduced into southern France from northern Italy when the French conquered Milan in the Piedmont in 1499. The antecedents of the Marseille Tarot would then have been introduced into southern France at around that time. The game of tarot is claimed to have died out in Italy but survived in France and Switzerland. However, alternative theories suggest that the Milan pattern is not the oldest. The case has been made by many that the Marseilles pattern deck has a medieval origin. In any case, when the game from France was introduced, or reintroduced, into northern Italy in the 17th or 18th century, the Marseille-type design of the cards became dominant. 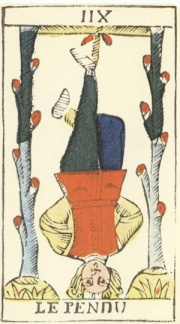 The name Tarot de Marseille is not of particularly ancient vintage; it was used by Romain Merlin in 1859 and later it was coined in the 1930s by the French cartomancer Paul Marteau and publisher, inheritor of the famous family publishing house Grimaud. Prior to this, it tended to simply be called as 'Jeux de Tarot', the 'de' ('of') having the ambiguous meaning similarly found in English between 'from' and 'about'. Differences in design style would be referred to by the publisher details usually depicted on the two coins card. Through the publishing of a deck based very closely on the Conver deck, this latter indeed originating in Marseille, he introduced this collective name to a variety of closely related designs that were being made in the city of Marseille in the south of France, a city that was one amongst other centres of playing card manufacture. The Marseille Tarot is one of the standards from which many tarot decks of the nineteenth century and later are derived.

Like other Tarot decks, the Marseille Tarot contains fifty-six cards in the four standard suits. In French language versions of the Marseille Tarot, those suits are identified by their French names of Bâtons, Épées (Swords), Coupes (Cups), and Deniers (Coins). These count from Ace to 10. As well, there are four court cards in each suit: a Valet, Chevalier or Cavalier (Horse-rider or Knight), Reine (Queen) and Roi (King). Many tarotists nowadays, whether English- or French-speaking call these court and pip cards minor arcana ("arcanes mineures" in French). The court cards are sometimes called "Les Honneurs" or "Les Lames Mineures de Figures" in French, and "Royal Arcana" in English.

There are also the standard twenty-two trump cards. At times, the Fool, which is normally unnumbered except in rare instance (and then as either zero or as twenty-two), is at times considered as separate or additional to the other twenty-one numbered trumps. These twenty-two cards, in addition to their appelation as trumps are often also referred to as the major arcana or Atouts (or 'Arcanes majeures' in French). 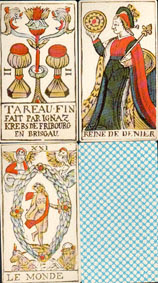 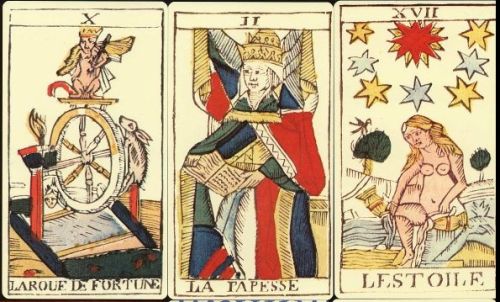