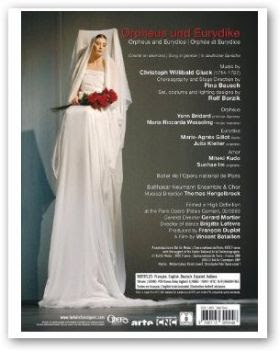 Orphée et Eurydice - Ballet de l'Opéra national de Paris
Filmed in HD at the Palais Garnier February 2008 Orpheus and Eurydice is Pina Bausch's masterpiece and the ultimate symbol of the genius of this German choreographer, who died last June, five days after being diagnosed with cancer. Bausch was the artistic director of the Tanztheater Wuppertal, which she founded in 1973. She had a formidable international reputation as one of modern dance's greatest innovators. Her dance-theatre works include the melancholic Café Müller (1978), in which dancers stumble around the stage crashing into tables and chairs, and a thrilling Rite of Spring (1975), which required the stage to be completely covered with soil. Excerpts from Bausch's Café Müller and another of her works, Masurca Fogo, reached a wider audience when they were featured in Pedro Almodóvar's film Talk to Her (2002). Bausch also appeared in Federico Fellini's 1983 film And the Ship Sails On. In recent months, she had been preparing a 3-D cinema project with Wim Wenders; shooting was slated to commence in September. Bausch continued to perform as a dancer throughout her 60s. Her company last visited the UK in 2008 for a sold-out series of performances, drawing long queues for returns at Sadler's Wells in London.

"She was an artist of the kind that the world is only blessed with from time to time. Her repertoire of works has inspired generations of audiences and artists with an impact that is hard to overestimate." Alistair Spalding, artistic director, Sadler's Wells
Orpheus - Yann Bridard (ballet), Maria Riccarda Wesseling (opera), Eurydice - Marie-Agnès Gillot (ballet), Julia Kleiter (opera), Amor - Miteki Kudo (ballet ) & Sunhae Im (opera). 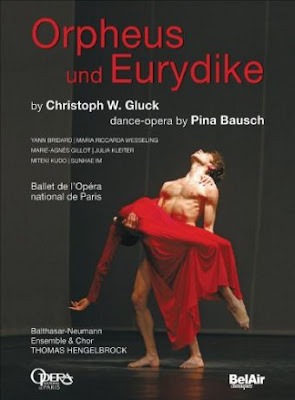